Hugoton Residents Stumble onto Their Own History 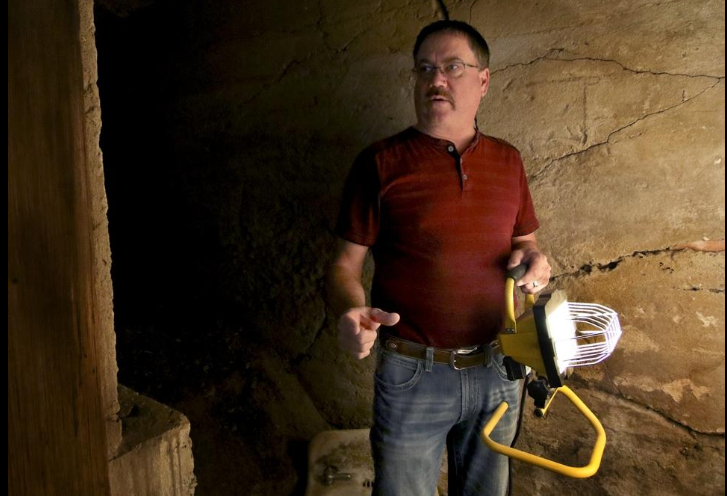 This story was originally published in The Garden City Telegram, written by Amber Friend. Original story can be found here: http://www.gctelegram.com/news/20180503/hugoton-residents-stumble-onto-their-own-history

When Jan Leonard first stood in front of the entrance to a dirt-filled tunnel in the basement of a hundred-year-old building in Hugoton, he was hunting for Bonnie and Clyde.

Or at least what they may have left behind.

Leonard, then entering his fourth month as Stevens County Economic Development’s executive director, hoped to beef up the county’s tourism by presenting the area’s rich history, including the fleeting presence of legendary outlaws Bonnie Parker and Clyde Barrow. What he found instead was something a little closer to home.

According to the book “A History of Stevens County and Its People,” Bonnie and Clyde landed in Hugoton in the early 1930s, when strangers often came searching for the town’s wealth of natural gas. Under the aliases Blackie and Jewell Underwood, they worked on farms and eventually opened Jewell’s Cafe, a long, narrow diner that sold bootleg liquor.

Years later, the couple was ambushed and killed in Louisiana in a car they had stolen from Topeka. In the car, the FBI would find a receipt book from Jewell’s Cafe. There are conflicting reports on whether Blackie Underwood was Clyde — he may have been in jail, he may have escaped — but former Stevens County Economic Development Director Neal Gillespie said the receipt book proved Jewell was Bonnie.

“We wanted to try and get a display or something out at the museum and at least tell the story,” Gillespie said.

“A History of Stevens County” is an old book now. Many of the people it speaks of are gone, the places papered over. But the county’s history is still a point of excitement for some residents.

Gillespie has poured over records of Bonnie and Clyde’s time in Hugoton, saying his grandmother remembers bidding them goodbye as they left town.

Lacey Vertrees, whose hair salon has transformed the building that used to be Jewell’s Cafe, said she found clues of the cafe when remodeling: remnants of bolts on the walls that held up tables; an empty bag under a lone piece of wood in the concrete floor. Standing in the now sleek, modern kitchen she said she can picture a story of Bonnie, cigar in hand, telling an ice deliverer to set the ice on a sheet of paper in the diner rather than open the booze-filled ice box.

The stories, enthusiasm and star power all pushed Leonard to find out more about the couple’s time in Hugoton.

Vertrees’ salon stands next to a two-story building with an extensive, multicolored past. The unused upstairs still has fitting rooms from its time as a clothing store. On the first floor, the spotted brown ceiling tiles harken back to the building’s tenure as an oft-watered plant shop. Further back in time, before Bonnie and Clyde, the building was part doctor’s office/part hotel.

Months before Leonard stood in front of the tunnel, Rindels had revealed it. In the summer of 2017, he tore down two, thin panels and a nailed down door in the hope of finding one of the city’s old, underground tunnels said to be in his basement. He had found the tunnel, but it was a small closet-like enclosure, full of dirt and old bottles. He said he didn’t think much of it.

It wasn’t until early April, when Leonard hoped to find a tunnel Bonnie and Clyde may have used for bootlegging, that Rindels and Leonard found everything the small tunnel had to offer.

The two, with some help from Gillespie and Hugoton Area Chamber of Commerce Executive Director Alisha Owens, began pulling artifacts from the dirt, sorting them as they went. There were rusted hinges and door handles, the stands and covers and bulbs of light fixtures, a long wire wrapped around an outlet, a well-worn door and sink, old wood and a gold mine of old bottles and vials filled with liquid.

“I’d like to go ahead and go further maybe later, but I was worn out,” he said.

When they were done, Leonard and Rindels had two folding tables worth of artifacts, not including 367 bottles lined in rows near the basement wall. They looked like liquor bottles, but leaked a sweet, stinging smell into the air. After a week of research, Leonard found that the bottles and everything else in the tunnel most likely belonged to William Elwood Bundy, a doctor who lived and worked in the building from 1911 until his death in 1928.

Leonard had set out to uncover famous outlaws, but instead had stumbled onto an accomplished Hugotonite.

Jamie Rees, museum curator and assistant librarian of Clendening Library & Museum at the University of Kansas Medical Center, said she doesn’t get calls like Leonard’s every day. People ask about objects they find in attics or garages, she said. But they rarely call about items personally excavated from a 100-year-old, walled-over collapsed tunnel. And that wasn’t the only reason she was interested.

Rees said there was an unusual amount of information available on Bundy. By looking through old medical records, past issues of the Hugoton newspaper, Ancestry.com and family records, Rees and Leonard were able to find out that when Bundy lived and worked in the old building, it was a hotel and doctor’s office.

Before Bonnie and Clyde even came to town, Bundy worked as a public health officer and operated a fairly famous skin clinic in his Hugoton hotel, a building that would one day be owned by Rindels.

Bundy was known for allegedly curing skin cancer by applying a concoction to patients’ skin. Within a month, the cancer would supposedly rise out of the skin to be painfully peeled off and stored in jars around Bundy’s office. Armed with a recipe for the cure one of Bundy’s great-grandchildren gave her, Rees said the story sounds far-fetched, but she’s still curious about the contents of the bottles and vials Leonard found.

“It’d be interesting to see,” Rees said. “Was he causing harm? Why was it working? ... Was he treating cancers that have a remission rate that’s fairly high? Why were people always satisfied if this is something that shouldn’t have been working. So there’s just a lot of questions that I think would make an interesting investigation.”

Leonard brought Rees vials and bottles last week, which she said she will test over the coming weeks. At a point in the near future, the two hope to display the vials and information on Bundy as an exhibit at Clendening.

“The story is compelling because you’re digging up buried treasure...” Rees said. “We’re a history of medicine museum, but we tend to focus on specifically Kansas history of medicine. And we have a lot of stuff from northeastern Kansas, but we don’t get to hear as much from western, and especially very southwestern Kansas. So I’m excited to see how that compares.”

Leonard also reached out to the Kansas Museum of History about the Bundy artifacts, and plans on making exhibits for it, Bonnie and Clyde and rodeo performer Buddy Heaton at the Stevens County Gas & Historical Museum in Hugoton. He said he hopes the exhibits will bring visitors, but also attention to the county’s varied history.

“They’re the epitome of the saint and sinner. Dr. Bundy saved people, and Bonnie and Clyde were outlaws,” Vertrees said.

Last week, Leonard invited Bundy’s great-grandchildren, Roxie Thornburg, Greg Parks and Kathy Williams, to come see the artifacts in person. They walked past the tables in Rindels’ basement, looked through old belongings and posed for a picture.

Thornburg said she didn’t feel any superhuman connection to the long-gone relatives she’d never met during the visit. The building, infinitely reused and redone, didn’t look like she imagined a turn-of-the-century hotel and doctor’s office would look. But, she said, the number of objects Leonard and Rindels found was “awe-inspiring.”

“I just find it very interesting,” Thornburg said. “It’s one of those deals where your great-grandparents are going to be remembered forever.”

The exhibits at the Hugoton museum and elsewhere are still very much in development, Leonard said. But, as Thornburg said, Leonard will “follow it up until he doesn’t have any more to follow.”

The Bundy artifacts, found on accident by way of burning historical curiosity, still will be investigated by a town that cares deeply about its history, even if it wasn’t the history they were expecting.

May 22 2018
TOPEKA, Kan. (KSNT) - Governor Jeff Colyer said people looking for jobs can soon find them all in one place and with the click of a mouse. Gov. Colyer said the new Kansas Career Navigator website gives people real-time access to high-demand, high-paying jobs available locally and across the state. "We have over 50,00...Continue Reading

May 15 2018
In an effort to match unemployed job seekers with Kansas employers looking to hire workers, Governor Jeff Colyer, M.D., is proud to announce that the State of Kansas has launched “My (Re)Employment Plan,” a program that blends enhanced workforce services with personal responsibility to get Kansans back to work faster. Th...Continue Reading

Governor Colyer announces communities to be designated as Opportunity Zones

May 10 2018
TOPEKA – Kansas Governor Jeff Colyer, M.D. and officials from state government agencies have completed a review of Letters of Interest submitted from communities across the state to be considered for designation as Opportunity Zones. Opportunity Zones are a new economic development tool enacted by the Tax Cuts and Jobs Ac...Continue Reading